Get The Whole Story: Please check the Microvascular Decompression tag page to hear all the updates about my MVD surgery.

What’s The Matter With Me? Podcast Season 3, Episode 14 Excerpt: “Flapping My Arms”

“and this is kind of joking, I guess. I get nervous, you know. You know, if you ever see me like making fart noise or flapping my arms, you know, somebody very close to me has died.”

What it means, basically that. When I’m flapping my arms again, you know I’m scared. I make jokes, it’s because I’m scared.

All right, welcome. Thank you for listening to The What’s The Matter With Me? Podcast. It’s another one of these shoot it from the hip episodes. I’m not a medical professional. Don’t take this for medical advice and if you need medical advice, ask your healthcare provider.

Last episode, The episode is called, “I’m Having Microvascular Decompression Surgery” and that’s a rather descriptive title. Check it out on WhatsTheMatterWithMe.org. Look on Apple Podcasts. However you get it, that’s how you get the What’s The Matter With Me? Podcast.

“and this is kind of joking, I guess. I get nervous, you know. You know, if you ever see me like making fart noise or flapping my arms, you know, somebody very close to me has died.”

What it means, basically that. When I’m flapping my arms again, you know I’m scared. I make jokes, it’s because I’m scared.

Microvascular decompression surgery, MVD, it’s technically a noninvasive surgery, I guess, but it’s the most invasive sounding noninvasive surgery I’ve ever heard of. They’re going to open up my skull. And surgery is coming up in two days. I went to Palo Alto last week, week, met with the anesthesiologist who informed me I was going to be first on the schedule, which is a good thing, but it means I have to get there early. And you know, it’s Palo Alto, I’m in East San Jose, I’ve got to give a little time. So early is early.

Let me give you a pain update. I’ve been having pain. This is like, I kind of kept a little diary of dates: “I’ve been having pain, trouble eating cereal, September 5th. Now I’m in remission, eight days after writing that, September 13th. I’m having a low level of pain today. Kind of annoying, but because I’m so traumatized it’s also more than that, it has a fear component.” That’s today, September 17th. I’m not feeling that bad. I was feeling pain, I came out of it and now I’m back in a little bit. That’s how it goes, it’s like a wavelength. I’m kind of scared, but at least I’m not in major pain right now. That’s the way … I mean, what else can I say … Wish I could say something better.

I went to a wedding.

It was like a family reunion, a rare thing in the family. Everyone was there, it had been like decades, you know? And so everyone was there and the energy among us all, it was tremendous, and I thought that was a good thing for me. So I was glad to be there.

It was 96 degrees in the shade last weekend, and the seats were mostly all in the blazing sun. Everyone who had a seat in the sun stayed standing in the shade close to the house waiting for the wedding music to begin so they would take their seats.

I experienced Uhthoff’s Effect, which I went over first in episode seven.

It was discovered in the 19th century by a German neurologist. He figured out that people with MS feel bad when they’re in the sun.

I’ve recovered, but unfortunately it caused my symptoms to get a lot worse temporarily. Uhthoff’s Effect makes your MS worse when you get heated up and humid. They discovered it by putting MS patients in black felt boxes in the sun at the beach and they experience it there. Unfortunately, I experienced it. It happened to me sitting there in the shade. It was so hot and the humidity rose from the grass. It was just overwhelming. I couldn’t even talk. I was badly slurring my words even worse than usual.

Of course, my cousin Tommy sat next to me. Here we go. Tommy is a police officer, and he’s asking me all these police officer kind of questions, like grilling me. He’s like, “What year did you move from New York city?” Questions where you have to think about the answer. I love Tommy, but I was not in any condition where I was responsive to questioning. I love Tommy. “When was the last time I’ve seen you?” he says. “What year was it?”

I had to apply ice packs. It took me like 45 minutes, at least, just to get normal. It really took me a couple days to fully recover. It was really hot and you know, I said later, I was like, “It was a hell of a wedding.”

That’s all for this time. Check it out. Worldwide universal sponsor, Hoppin Hot Sauce.

Oh wait, wait. You dig music? I’ve been making strange music. Listen to it. It’s totally weird. It’s pretty distasteful in a way. It’s kind of like computer jazz. Check it out, canned saxophone and everything. Check it out. SoundCloud.com/john-hoppin. That’s right. SoundCloud.com/john-hoppin. All right. What’s The Matter With Me? another one in the books. Thank you for listening to the What’s The Matter With Me? Podcast. 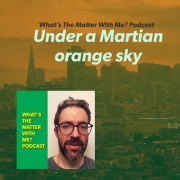 Under a Martian orange sky 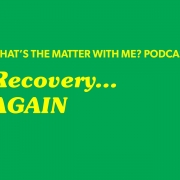 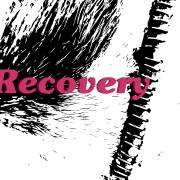 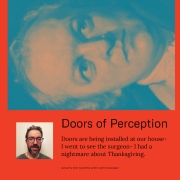 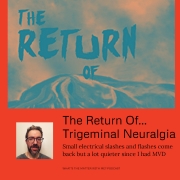 The Return Of Trigeminal Neuralgia 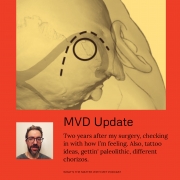 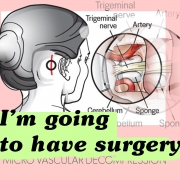